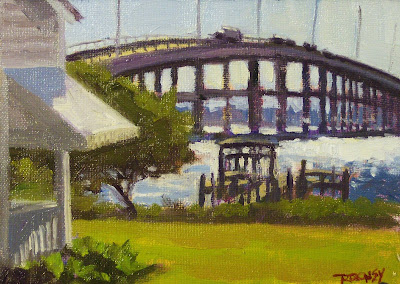 i have a fascination with it. even the paintings i buy for myself are all (at this time) backlit subjects.


when painting, i'm always drawn to this lighting effect when i see it. there's something magical about it. and its very hard to capture realistically because of the dark silouhetted subjects against a usually blinding sky. the stark light against dark value contrast is tricky and hard to replicate from real life.

here's one from morehead city side looking thru some houses at the atlantic beach causeway.


once i got back to the studio i was wondering if the bridge couldnt use a little softening in the distance as it goes toward the right side of the painting and on the other hand i kinda like the stark contrast between the dark valued bridge and the dreamy atmospheric look and the light-ish building and awning. it didnt jump off the page as being the wrong values out there so i may just leave it alone. i'm trying to quit second guessing stuff like that after leaving the field. its almost like armchair quarterbacking from the studio. maybe there's a truth out there standing in front of it thats on the canvas that will be lessened after changing it back home 6o miles away under artificial light. who knows?

Contact me by email if you're interested in this painting. auction will end 7 days from the first bid, and go to the highest bidder
Posted by mike rooney studios at 11:55 AM

thanks chrisb- it was very cold that morning, my hands were shaking and its only 5x7.

i love to cruise carole's site too. i dont usually look at still life sites but hers are captivating arent they

i suggest everybody check out her bold, confident brushwork

Great work Mike... a good artist friend of mine likes to paint back-lit subjects too... check out Larry Seiler's plein air work... link is in my bio on OOPS page. I can identify with the cold hands... recently got back from painting in the Blue Ridge. Thanksgiving day started out 60 degrees and ended with snow flurries! Take care my friend! 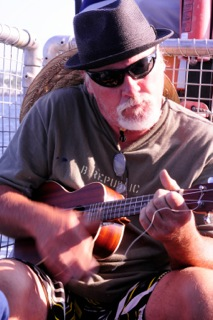