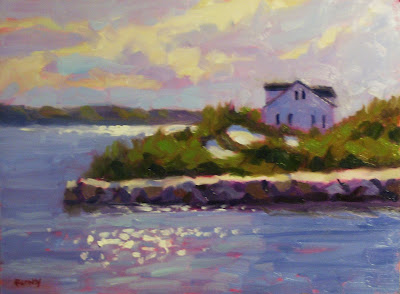 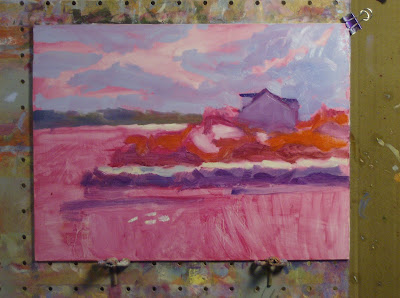 here's the underpainting. a little more magenta in it than yesterdays because thats how the original looked. working on this one really brought back the feeling of being in that same exact spot five months ago. its like reliving it all over again. that is so wild! if everybody could paint nobody would ever take photos again. thats why they take all those pics of vacations etc. but if they ever experienced repainting a plein air piece they'd throw their cameras away!

got good news yesterday that both my paintings in the Outer Cape auction sold. i'm on cloud nine because i know that most of the artists in that auction were ex-cape school students. i'd be stoked ordinarily selling two of two but against that talent pool? they must like my bastardized version of their cape school influence, up there. the one from yesterday and today are both going to the next auction up there in late february and had to ship today to make the deadline.
Posted by mike rooney studios at 1:22 PM

Outstanding, Mike. You went onto their "turf" and scored big...that's gotta be super exciting.

steve- thats quite a talent pool to be competing against. i mean henry hensche's wife ada's stuff was in the auction along with lois griffel, and hilda neilly, rob longley to name a few. to even sell one would have put me over the moon. to sell both. WOW! i did two more right away and shipped today in fact for the one coming up in february. i'm keeping my fingers crossed that the red dot angels are looking down on me again :D
thanks man!

That's awesome Mike! I'd be stoked too to be exhibiting with that caliber of artists. Congrats on the sales!

justin- you keep working hard like you've been,paint every chance you can and watch what happens! that and giving all the praise to God when it does.... the world is your oyster as they say

way to go mike. i am not surprised! what a man of talent, faith and Personality! a friend of mine from del. is following you and sounds like she will connect with you in florida. know if she does, it will be the highlight of her time down south! take care my friend.

anne
arent you sweet! i think she's going to meet me in key west one day when she comes over from marco island
sounds like a nice lady.
thanks for the nice words!